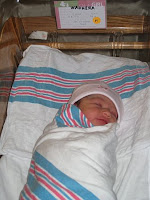 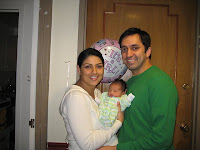 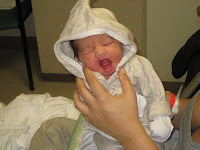 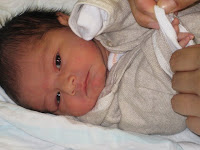 Ok, maybe some years down the line when my dear niece googles her name... I hope that this pops up.

On 13th of January 2008, at 3pm, the Fourth Generation entered in our small universe we call family. She is named Sania Wadhera... and my Bua says that Sania looks quite like her Bua... that is me...!!!

You know, I am gonna turn 22 this years and it still feels so...weird in a good way to become bua from being a niece most of my life. My grandma now becomes great grandma... and we are just hoping that we get to see our lil angel soon. In real time.... its gonna be prolly end of this year... ( I hope so...!!) but pics... sure enough are on its way... as soon as my bro gets time... The other day I was talking to my college friend Aashish. We all are planning to meet up on saturday and maybe go out for a movie, if our exams are postponed further. Anyways, there are basically two things that we end up talking, either food or about our respective love lives.

It so happens that in 2005 thanks to my lil bit of intervention Aashish and hi lady love finally got around to professing their love to each other. The thing in their relationship is that even though they stay about 20 mins apart from each other thanks to all the snooping aunties of the colony and strict parents both of em cant meet up if its not a college day....!!! Well.... that is their story... atleast they get to meet when its college.....

Yahan par toh kahani hi aur hai.... Me n Shayon how much ever do we like, its really hard for us to spend the time we would like with each other. We are bound by a limit known as that of cash. Its always the financial constraint that comes. If we do manage to get our finances in order, thanks to our schedule, we end up so tired that during the night when we can talk without being disturbed we end up slepping and not talking at all. Can you believe it that its been like so long... yeah... almost a week maybe that Shayon and I havent really talked properly... and this time both the reasons are present... its the starting of the year and money has become a problem... already... and then both colleges are on... and the there was my fest and now the exam time is also around the corner...
Winter is so depressing and its becoming gloomier thanks to all the love woes that are going on...!!!
(Sigh....!!!)
Posted by Sakshi at 3:12 PM No comments:

My New year started with a Bang... literally.... The yearly college fest that usually happens during the spring season was sprung upon us just as the weather department declared cold wave in the NCR.

Though, the fest was officially started on the 15th of December'07 with the presentation competation taking the lead... the cultural fest started on the 2nd of January'08. The entire experience of preparing for the events starting from the 2nd was exhilarating. What with the group dance being the hugest of the projects of this event.

The theme of the cultural fest this ytime bsically revolved around patriotism,religion and folk.... and our group dance was on Vande Matram by A.R. Rehman. It was so much of fun, making everybody practice and ofcourse choreographing the dance. But the best part about the whole thing was that I was the only girl in my group that was staying back the latest. What with the dresses to be arranged and then making sure that the music was right... and then ofcourse the demandss ofd our faculty and keeping everybody happy... it took all the diplomacy that I had to put the show forward for our department. Ofcourse, my friends, which included both my classmates and seniors made all their efforts to have me around without losing their cool.

Anyways- if our group dance and the fashion show were the biggest things that were on our minds then the highlight of our participation was doing the unexpected and winning in the categories in which we were the last minute entries. The best of this was the cooking competation, wherein we ransacked the appt of one of our faculty member and cooked four dishes in half and hour and managed to grab the first prize....!!!

Now, that the fest is over and all the experiences have been shelved in our memories.... its back to the gring of studying and the usual mundane life of classes and college..... but... when is college life ever mundane....??
Cheers....!!!
Posted by Sakshi at 2:04 PM 2 comments: