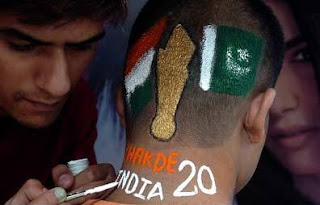 The world T20 final, couldn't have been bigger or better. A final that every Indian would remember. A final that has made history yet again after 24 years of long wait. Twenty four years earlier a young lad named Kapil Dev, led to the most amazing Indian win in the World Cup. He always said- "Play Cricket from yourt Heart".

The celebrations after 3 hours continue to rock the city.... and as I write this post it feels that Id, Diwali, Holi and Christmas have come early and have come together here in India. We are a cricket crazy nation, a country United in the win against their arch rivals. The match was more important because it was against Pakistan. And the record holds it, that India has never lost to Pakistan in a World Cup Match. Even in 2003, ofcourse we were disappointed that we couldnt win the cup, but we were much happier because we had beaten the Pakistan team in the Semis to reach the final.

India made 157/5 in their innigs, and batsmen like Yuvraj and Dhoni just couldnt fire like they did in the previous matches. But the sensible knock of Gautam Ghambir (75 of 54 balls) took India to the total that was competative enough. In their innings Pakistan gave a fair share of competation to us and evry ball wrongly place was put away for a boundary. But the early and regular fall of the wickets put the pressure on the Pakistan team. Though the most crucial wicket that turned the match was that of Imran Nazir. He was run out by Robin Utthappa, a direct hit mind you. Also the other crucial wickets were taken by both Rudra Pratap Singh and Irfan Pathan. They did awesome work with ball. Though Joginder Singh was hit when he balled, the last wicket and the match taking wicket was taken on his ball by Sreesanth.

This Cricket team lead on the front by their Capain, is a Young and Vibrant team, A dream team maybe, but what matters the most is that this is the team that has tapped the raw potential of the young blood and made us proud.