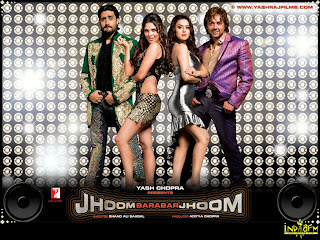 A movie which has Amitabh Bachchan singing a song and not having a dialogue in the entire length of the movie....???

Interesting huh... I just came back after watching JBJ... and trsut me if you are planning to just freak out and are not interested in serious movies..its a must watch. The story begins when two strangers i.e- Ricky(AB's Baby) and Al(Priety) are forced to wait for 2 hours on the station waiting for a train to arrive. And guess what- Both are waiting for their Fiances... and that is where the twists and turn begin. A light hearted movie inter woven with loads of song and dance sequences. The title number is the most amazing and rocking of em all. Be it the Amitabh version or the Disco version. There is also an amazing romantic number...

The coustumes...or rather the clothes- were amazing. The scene creation was also very good. Though not Shaad Ali's best, but movie has great one liners, and lots of old songs in the background to create effect.

Now as for acting- All the characters- Ricky, Al , Aniada(Lara Dutta) and Steve(Bobby Deol) have done a great job. Special mention here about Bobby... he has done amazing bit of acting for his small role..and the same goes for Lara...she is very convincing in her character.