Yes, I am going to bore you all with all the details of the wedding, thus dividing the whole thing into days and events. I am a sucker for details.. but you are more than welcome to not to read the details. :D

So we landed in Goa, one day prior to the official start of the wedding festivities, after all we were part hosts.. And it was a mess to just get to the airport. There were 6 of us going from my house and two other who were reaching the airport from their house.
For 6 of us, we were carrying NINE bags. It is not funny. Trust me! Because these nine bags were just the check in luggage, there were the hand baggage that each of us was carrying too.. and for the two grand mothers that were travelling with us, well, I was lugging their hand bags along with mine. So, basically I was looking like a coolie. 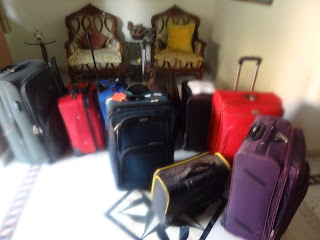 IMPORTANT lesson, in case you are travelling with loads of people in an early morning flight, either eat breakfast, or keep your mouth shut. Because, we were so flustered about making sure that everything that we would need is there and is packed properly, we did not bother to eat at all. For some weird reason, I was very calm and composed but my usually calm and composed father was totally cranky and that gets us scary.
So a cranky lot of 6 of us reaches the airport, manage to check in and despite the our luggage allowance being 120 kgs, still manage to be overweight and thus end up carrying another handbag!!

All this while my father is super cranky and super grumpy. Thanks to the new food court at the airport, the moment my father gets his morning breakfast he is back to being his normal calm and jolly self, and finally the eight of us *two others have also joined us by this time* board the flight, and Dad blasts off again.. because, both sister and I wanted window seats.. and in all that confusion.. we all end up sitting separately! *Mom and dad sat together, both grand moms sat together and two others sat together and sister and I were on totally different seats* and because it was a flight to Goa, there were foreigners and there were weirdos.. esp the one sitting next to me! I think his girl was coming from else where to Goa and he was sweet talking to her all the while till take off! And then, as soon as the phones were allowed to be used again after landing he was talking to her.. and he had a weird hairstyle and was too much of an metro-sexual male for my comfort zone.. and yes he had a super fake accent.. and jumped between fake accent english to bengali.. like a jumping bean...
So any ways we landed in Goa, reached our hotel.. Martin's Comfort, a simple hotel for the night before we moved to the hotel where the wedding was! And after lunch... I went with my bua to the Wedding hotel, coz, the Bride, the groom, and my other brother with his family were staying there only. Plus, the Bride was getting her mehndi done a day before the actual mehndi so that she could have fun on the function.
And, since, I was required to do the running around the whole of next day.. I jumped in the Que as well. Bua also got her mehndi done with me that day.


And, by the time it was evening.. there was enough confusion.. with the decorators not getting the decorations ready for next day, and last minute up downs!


The Sour part of the day was the Dinner. My sister and I were told, that every one including my brothers and their friends and all of us will have dinner at the same place.. a shack called 'The Pentagon'. It had a live band, and lovely food. The rude shock.. that the youngsters were at another place 100 mtrs away and sister and I were stuck with Parents, Bua and Uncle, Grandmoms and my other bhabi's mom! Because we were not told about the change in plans or invited at the shack.. I decided I wont go. Sister felt bad too! Esp since the groom a.k.a my brother and the other Cousin 'A' came to say 'Hi' to us, and did not invite us!

We did end up going to their party later on.. to catch on some drinks, because my darling chachu dropped in for dinner with us! :D
Oh..
Sister had her first 'Kamikaze Shot' ever, that night! :) She has become an adult, officially mind you.. and we all had fun making her do her first ever shots! :)

But, the festivities were yet to start.. and the party had just begun!
Posted by Sakshi at 11:14 PM

ooh, lovely mehndi on the bride! Every time I attend a cousin's wedding and get mehndi done I am always rather jealous of the extensive mehndi the bride gets while I can barely get one hand done with all the rushing about that has to be done simultaneously.

And wow, you really had all those huge bags? Must be stuffed full with wedding finery. I dont even carry that much luggage when I go home to Goa. And where'd you guys hang in Goa? It's lovely this time of year!

The mehendi is so beautiful! And its a really good idea, getting the mehendi done the previous night so you can have fun the next day :)
Awesome!! Have loads of fun!

Makes me feel as if I was there too. Good MEHANDI designs.

A goan wedding is a dream...lovely pics. Enjoy.

Nice design. It is very hard to see the "S"

how was your dewali?

@TUIB's
Well, we were 6 people travelling, plus there was a bag for my bua that we were carrying.. so yup the luggage was a LOT.
Even people at the airport were amused! :P

You are from Goa? Wow!!! Wow! Will write about the goa travails in the coming posts!

@HGL
Yup for the people who have to work, it is a great idea to get it done a day before.. but for the bride that is the day.. *I am still old fashioned about these things!!*


@Alka
It is a dream wedding.. and therefore my father has made it clear that this wedding should not become my bench mark wedding!


@Arooj
Diwali was fun.. we were more excited about flying out the next day for the wedding!!

amazing!!! Shadi is always fun..Your meindi is cute .You are very beautiful :).

ha ha wedding they are always fun ..
how will it be with no problems and no arguments :) and no one getting upset he he he
it adds to the charms for end of the day we all get together and have some solid fun :)

Love the mehendi. :) u look lovely.