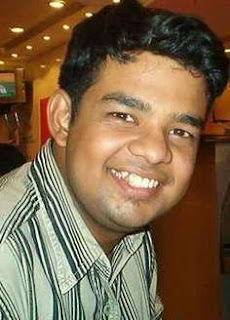 In the series of posts that are gonna come now, I am going to introduce to the world the cast that comprises the love story that is gonna follow.
I know, I know- You did read my love story in the post that I had posted earlier... but am sure that after reading my previous post you know that I am going pen down the story thus far- 3 years, 9 months and two days of my relationship chronicled. I don't know if you want to read it... I just know that I want to write it.
********************************************
First up- The hero of my story- Shayon.....
Sayantan, known by a lesser complicated name Shayon to all is a year older to me. The first thing that you notice about him, is that he is not the best looking guy in the world. He even carries a ponch which he doesn't even attempt to lose out.
The next thing that you notice about him, is that his magnetism is not because of his looks its because of that killer smile that forms a dimple on his cheek and the way his eyes twinkle when he smiles. Sit and talk to him for five minutes and you are baffled by his worldly knowledge and his clever talks... and the best part is- He is not a nerd...at all... despite his specs....
Unlike the misconception that guys can be lame when it comes to talking anything but sports or finance, this guy has a lot of sarcasm to offer and opinions on everything. It was due to this that we first clashed on Hi5 in a book discussion group.
Shayon, took admission in NIT Jamshedpur in the year 2003. But an unfortunate incidence (read as- being at the wrong place at the wrong time.... he has a knack of doing that) got him suspended from college...
That meant at the time we met, he was pursuing a diploma course in NIIT and ofcourse doing what he loves the best, surfing the net and making new friends.
He had just gotten off from a six year relationship with Aishwarya (they are still friends) and was trying to pataofy a female in his class at NIIT, Vasudha.
In one line - He is a complete charmer, loves to make new friends...and makes sure that old ones remember him....always....
*********************************************************
It was under these circumstances that we met.
The Heroine: Me, will get introduced in the next post....!!!
Posted by Sakshi at 6:31 PM